The Green Messenger from Outer Space

Long time ago, in a faraway galaxy...

On the S.S. Rough Living set its destination to the Earth, there was Shuuse Autumn who had taken a mission to transport "K.P.", a certain space living organism.

However, on their way a mysterious army attacks them.
It was the beginning of a long journey to bring K.P. back to its home...

Rewards may only be claimed until the end of the event.

Access this event by clicking on the event banner on the Main Library screen or in the Book Delve menu.

The event gameplay is similar to tainted book delving. Simply click on the large yellow button to enter the event bookshelf and begin the event.

There are four unique tabs on the event panel.

The first, Rewards Report will show how many K.P. the player has accumulated so far, plus the next unclaimed reward and recollection .

The next, Exchange will show the total number and types of rewards exchangeable for K.P.. The player may choose which rewards to exchange for with their K.P., and the number above shows how many times each reward may be exchanged for.

The third, Recollections shows the event recollections and the requirements to unlock them. The golden button on this tab takes the player back to the second tab.

The bottom one, Mission Requirements summarizes the objective of the event.

The bottom left area of the event main menu is where the player may use the scrolls dropped randomly from the event tainted books to access a special map "Invaders from the Sea of Stars". The boss of this map will not have a corrosion bar, but the K.P. gained will be determined by the total damage dealt. It is recommended to bring the strongest team possible to this special map.

Also, the event will have the Taints’ strength change according to the player’s writers’ levels, and according to the strength of the Taints the player can receive a “Sneak Attack Bonus”. The Sneak Attack Bonus is a set amount of K.P. the player can get that is not related to the amount of damage dealt. Prepare writers for battle as much as possible by blossoming, checking stamina and corrosion amount, equipping memoria cards, and leveling them up. 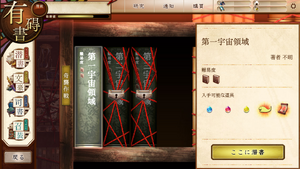 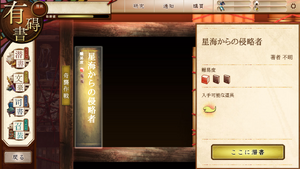 Begin the delve to purify the first book by clicking on the large yellow button.

Upon clearing the first chapter, the second chapter will be released, and so on.

Clearing the chapters will give rewards of small or medium souls and K.P..

4
Invaders from the Sea of Stars 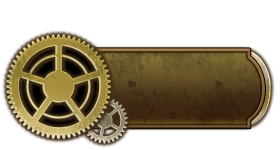 Invaders from the Sea of Stars

Including the introduction, there are 10 unvoiced recollections, all can be replayed in the Writers' Register. Once the event has ended, the recollections may no longer be claimed or added to the register.

After claiming all recollections, the player will receive a special stamp.

Click on a recollection title to view that specific recollection, or view them all at once here.