Bungo to Alchemist Wiki
Register
Don't have an account?
Sign In
Advertisement
in: Pages with broken file links, Main Library

View source
watch 01:54
Obi-Wan Finale - The Loop
Do you like this video?
Play Sound

This feature, which players may access by clicking the Strolls button in Main Library, allows players to take "strolls" to various destinations and spend time with the writers who happen to be there.

There are six "stroll destinations", where writers may appear:

Dining Hall and Infirmary used to be gameplay mechanics, but with July 28th, 2021 big game update they were removed. With November 1st, 2021, update they were added to the Strolls as locations to "keep the immersion that the writers are living human beings with needs."

Furthermore, there are two time periods in which the player may take a stroll:

Whenever the time period changes from Day to Evening or Evening to Day, the writers who appear at each destination will also change randomly. It is also possible that a stroll destination will not have any writers there.

As of 2019/10/31, writer who has been set as assistant will always appear in the strolls, unless if changed in the middle of strolls period. In such case, the writer will start appearing from the next period onwards in the strolls.

On top of the screen there are three buttons "About Strolls", "List by Trust Points" and "Strolls Settings".

By pressing the "About Strolls" (散策とは) button, a pop-up with short introduction about the feature will be shown to the player.

By the "List by Trust Points" (信頼度一覧), the list of writers at a location gets replaced with a list of writers in order by their Trust Points, from highest to lowest. If you want to see the location list again, press the "Location List" (移動先一覧) button or exit the Strolls and come back.

By the "Strolls Settings" (散策設定) button, the player may choose to view the writers in their default outfit or in alternate outfits from the ones the player owns. By default the game may show alternate outfits. If you wish to see the regular outfits only, switch the slider from "On" (入) to "Off" (切). 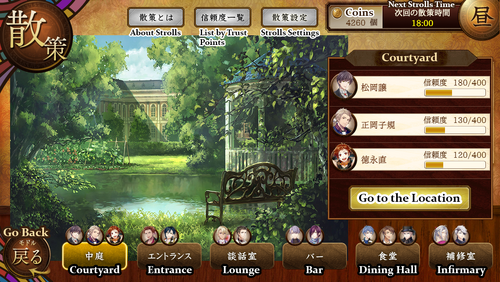 Choose a destination where a writer you want to gift is and move to the location from the big yellow button 移動, which takes you to the location. Click the writer, who will say his line associated with the location and you may pick a gift for him. This may cost coins depending on which gift you are trying to give to the writer. After confirming the gift, the writer will say his gift reply line.

In case you are in the Infirmary and there is a writer in weakened state (this happens randomly), "healing" him will cost one Governor. No actual healing is performed or needed. The writer may be left unhealed and he will be back to normal automatically when the strolls time period changes. However, writer in weakened state can't be gifted. So if you wish to give hima gift, heal him first.

The player may only give one gift to one writer once and heal one writer per period. Same writer can be both healed and gifted, if he happens to be weakened and you want to also further raise his trust by gifting. In other words, a player can give a gift to a writer twice per day and also heal two writers per day. These actions fill their "Trust" gauge. At achieving the following amounts of Trust Points, the writer will thank the player by giving them the following rewards.

The first possible present on the list is a beverage, which is free, but only raises their Trust by one. The player must spend coins to buy the other items. These coins were previously called "Decor coins" and only used to buy decor, but they may now be used both to buy decor as well as these items to entertain writers with.

Unlike most of the locations, Dining Hall has various foods as gifts, meanwhile Infirmary doesn't have any gifts available for writer who is weakened; he can be only healed by using one Governor.

The last gift costing 700 coins is randomly selected one of the available foods.

The last gift costing 700 coins is randomly selected one of the available foods.

Each of the writers has one line to say at each destination which is not dependent on the time period. They also have three lines each which are replies for when the player gives them a gift. The line they say when they receive a gift changes depending on their level of trust with the player. If the writer's trust is 120, the gift reply will be random.

For a limited time during different Campaigns, the writers will have a special reply when they receive the item Kashiwa Mochi, Chocolate or New Year's Gift.

To view individual quotes from the writers said during strolls, choose any of the icons below.

There are also two types of recollections available through Strolls:

All of these recollections can be viewed from "Recollections Register" in Register (in the Office).